When people think of alcoholism and alcohol dependence, they often picture a person knocking back hard liquor. Beer tends to raise fewer eyebrows, and is more frequently seen as a harmless way to kick back and relax.

If beer is your alcohol of choice, it might be easier to think that you don’t have a problem. After all, you reason, it’s not like you’re slamming shots or finishing off bottles of vodka or whiskey.

But heavy beer drinking isn’t harmless—especially long-term. In this post, we’ll cover how to know when you’re drinking too much beer, and solutions and steps you can take to cut back.

Is it Normal to Drink Beer Every Day?

For most people, occasional or moderate drinking is not a health issue. Having one beer with dinner most evenings, for example, may be completely harmless. There are situations in which daily drinking can be a sign of dependence. But how much you drink tends to be a bigger factor than how often.

If you’re concerned about your consumption, try asking yourself:

What Is Excessive Drinking?

Excessive drinking often gets broken down into two categories: binge drinking and heavy drinking. Additionally, any amount of alcohol consumed by pregnant women is considered excessive use. 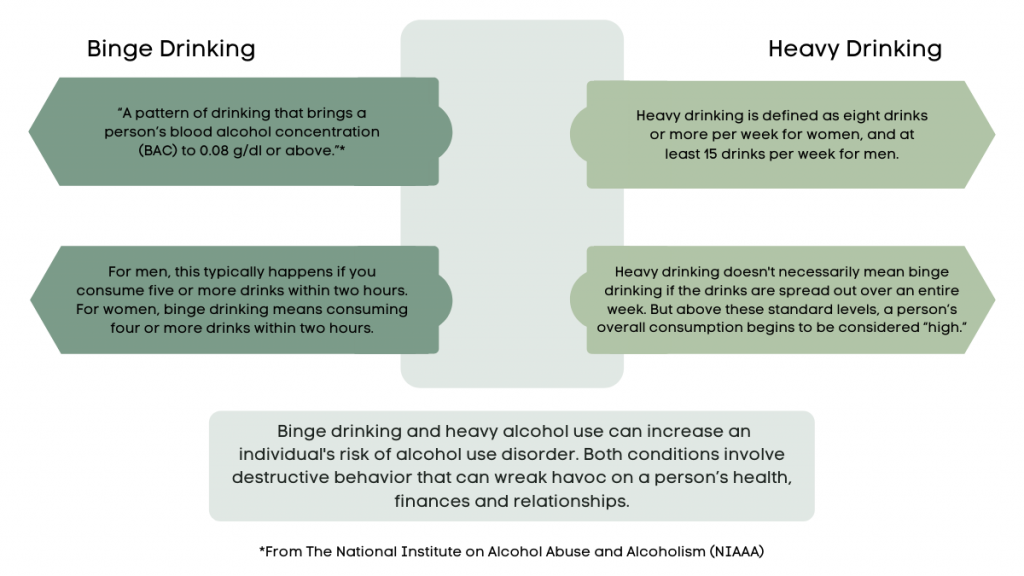 Binge drinking is defined by the Centers for Disease Control and Prevention (CDC) as “a pattern of drinking that brings a person’s blood alcohol concentration (BAC) to 0.08 g/dl or above.”

So, how common is binge drinking? In the United States, 1 in 6 adults binge drinks at least four times each month. On average, these individuals consume seven drinks per binge.

Binging is most common among men and younger adults (ages 18-34). In fact, men are twice as likely to binge drink as women. Men consume four out of every five binge drinks in the US each year.

Heavy drinking is defined as eight drinks or more per week for women, and at least 15 drinks per week for men.

This doesn’t necessarily mean that a person is binge drinking. This might be spread out over an entire week. But above these standard levels, a person’s overall consumption begins to be considered “high.”

Now you can answer the question, “Is my beer drinking excessive?”

If you’re a man and you regularly drink five or more beers in two hours, or if you drink 15 or more beers each week, your drinking is considered excessive.

If you’re a woman who consistently drinks four or more beers in two hours, or if you often drink eight or more beers in a week, your consumption also falls into the category of “excessive drinking.”

If you binge drink or drink heavily, it doesn’t necessarily mean you’re alcohol dependent. But if you drink beer to excess often, it can increase your risk of many serious health consequences, including:

All in all, alcohol is linked to at least 60 different medical conditions, including both short-term health risks, and chronic or long-term illnesses. If you drink 8-12 beers a day for several years, you will likely experience a range of health problems as a result.

Of course, long-term excessive drinking and/or alcohol dependence can affect more than just your health. It can also cause problems in your personal and professional life. These include decreased productivity at work, job loss, financial issues, and problems with friends, family, and romantic relationships.

The short answer, considering all of the above, is yes. If you are drinking 8 to 10 beers a day, or even more, you are generally putting yourself at risk for a number of serious issues.

How Long Can You Live Drinking 8-12 Beers a Day?

Over time, excessive drinking can severely impact your life span. Worldwide, alcohol misuse is the fifth-leading risk factor for disability and premature death. In the US, It is the third-leading cause of preventable death overall, according to the National Institutes of Health.

From 2006-2010, excessive alcohol use resulted in approximately 88,000 deaths each year, and an annual total of 2.5 million years of potential life lost in the US. On average, the lives of those who died were shortened by 30 years.

According to a study in Denmark, Finland, and Sweden, life expectancy among people with alcohol use disorder (AUD) was 24-28 years shorter than in the general population. For people hospitalized with AUD, average life expectancy was 47-53 years for men, and 50-58 years for women.

Are There Benefits to Drinking Beer?

In moderation, drinking beer may offer some health benefits, including:

Moderate drinking is defined as one drink a day for women, and up to two drinks a day for men. So, that daily (or twice daily) beer isn’t an issue for most people, as long as you can stick to it.

In summary, if you’re wondering how many beers a day is safe, the answer for most people is one to two. Drinking more than that on a regular basis can put you at risk, and often reverse any health benefits of drinking beer.

It’s a fine line to walk. If you’re having trouble cutting back on beer, we have solutions.

How to Cut Back on Drinking Beer

To some, beer may seem less dangerous than other types of alcohol. But that point of view can be misleading.

Your alcohol of choice doesn’t matter nearly as much as how heavily you drink it. Consuming any alcohol to excess can cause severe issues for your health, finances, and relationships. And, as we’ve discussed above, it can even shorten your lifespan by up to 30 years.

That sounds scary, but limiting your alcohol use doesn’t have to be. With Ria Health, you don’t have to give up beer entirely. You don’t even have to leave the comfort of home.

Our program combines evidence-based methods, such as anti-craving medication, weekly coaching meetings, digital progress-tracking tools, and online support groups. All accessible through an app on your smartphone.

It’s a comprehensive, confidential, and cost-effective approach to health care that works. On average, our members reduce their drinking by 75 percent in the first year.

Whether you want to quit drinking beer entirely, or simply stop drinking 8-12 beers a day, we’re here for you. Schedule a call with a member of our team today, or learn more about how it works.

Ashley Cullins
Freelance writer with contributions to numerous addiction blogs and a passion for relatable content.
Reviewed By:

Evan O'Donnell
Writer specializing in targeted, informative content. Dedicated to making the abstract accessible.
PrevPrevious18 Signs You Should Cut Back On Drinking
NextAlcohol and Breast Cancer: Does Drinking Increase Your Risk?Next